My Saturday in Hell: Riding the Ronde?

I didn’t sleep as well as I had the nights before. My dry, scratchy throat was not getting better. It wasn’t quite worse, but I was starting to really believe I was about to get sick.

Just as I had the day before, I entered the dinning room to be greeted the same inviting atmosphere and amazing spread of food. My appetite was strong and I ate just about everything. I was running low on supplies in my room, so I grabbed a couple slices of bread and the remaining cheese and meat for later.

I dressed in my 2Velo 1973 Brooklyn jersey and new, custom, Tiralento Brooklin wool shorts and went to the garage to collect my bike. My ride started on the same roads I used the day before. About 7 kilometers/5 miles in, I followed the signs and tuned off the route toward Oudenaarde. I rode through neat neighborhoods and several small towns that seemed as if they’d been recently abandoned. Where were all the people? 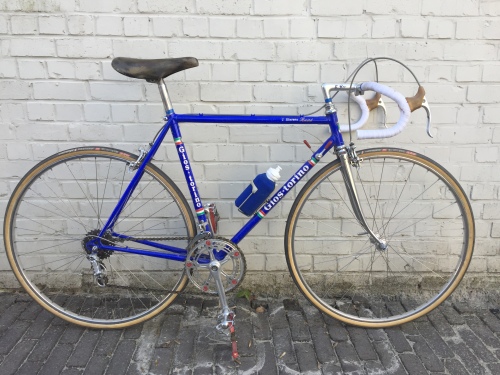 About an hour in, unbeknownst to me, my phone lost its connection and Apple Maps stopped prompting me. I rode until I hit a particularly nasty road where, unwilling to mingle with the traffic, I stopped to see what my other options might be. With my phone “dead,” I tuned around to search for a signal. Eventually, Maps started working again and I was on my way. It was about this time when I emptied my water bottle.

The next time Maps stopped, I was on a particularly enjoyable farming road. I followed it until I hit a “T” intersection. I had no clue which way to go, but my gut told me to turn right. About 50 meters after doing so, I spotted a sign informing me that I was on the Yellow Tour of Flanders Route. Lucky me. It was the road I was looking for, but I somehow found it at least 7 kilometers/5 miles sooner than expected and when I was well off my planned route.

The road wound its way through green fields and past cute, brick farmhouses. Occasionally the air was thick with the smell of cow urine and manure. It was along this road that I found my first Flemish cobbles. They rolled up and down through a village whose name I have forgotten. The cobbles were well maintained and were not nearly as painful as I expected. I hoped I might find an open shop or bar here where I could buy a bottle of water. I was really thirsty. But, there was no such luck.

A few miles later, I passed a windmill before hitting a second sector of cobbles—a legit farming road. Its chunky surface undulated like the back of a dragon from one side to the other. It was only slightly wider than a car and it stretched out in front of me, perfectly straight, as far as I could see. This was going to be along one. 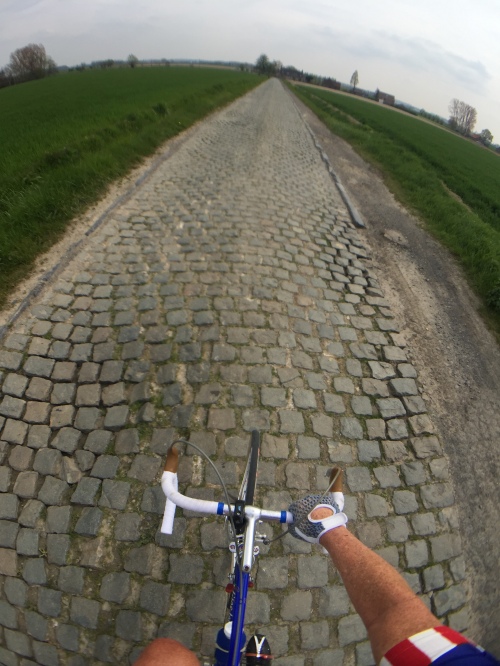 As I had in France, I pushed on my bars and slid backward on my saddle. I floated over the road’s surface, not quite effortlessly, but better than I had in Roubaix. I was optimistic that I’d make to the end of the road before I lost all power. The cobbles, however, had a different plan. The road was much longer than any I’d ridden in France. After only a few minutes I slowed and settled into a pace that I could maintain. I felt the road surface more, but at least I’d make it to the end, maybe, before I was forced to ride at a crawl.

Smooth gutters barely existed, but I took advantage of them when I could, diving from the crown to either side sporadically. I was having fun. Riding cobbles really could be enjoyable.

I wondered through the verdant Belgian countryside, following the Yellow Route signs, which were randomly hung on either side of the road and at various heights. I missed a some, each time realizing my mistake with a few kilometers before doubling back to find the route. Generally, however, I rode without care.

Several more cobbled sections and villages passed before I hit the first “hill” of the day and shifted into my small chainring. It wasn’t particularly steep, but it was certainly a hill compared to pancake-flat roads I’d been on. Again, I noticed how thirsty I was. My bottle was empty, but I gabbed it and tried to suck out a drop or two just to wet my throat a little. There was nothing around me except a few large homes, many behind fences and walls. I rode on.

Eventually, I popped out on a rather busy roadway. There were no Yellow Route signs, so I gambled and turned left, following another cyclist. A few hundred meters on, I entered a small town lined with shops and other businesses. Everything seemed closed. Near the opposite end fo the town, I spotted a sandwich shop with bottled beverages displayed in the window. The lights were on and it looked open, so I stopped. It wasn’t.

By now, I knew I was going in the wrong direction. I turned around and headed back through town the way I had come. Just after passing the town’s boarder, I spotted a Yellow Route sign. No wonder I’d missed it, it was on the opposite side of the road from where I had been. I turned right and headed into a park.

The road was lined with forest. It was beautiful. Quiet. Other than in a few small parking lots at trail heads, there were no cars. Along the road several male, ringneck pheasants casually strolled through the underbrush. They were big and their plumage brilliant. As I passed a fallow field, I spotted a northern lapwing. Its fighter plane-like flight pattern was impressive. T\Other than hundreds of wood pigeons and jackdaws, these are the first birds I’d seen clearly in Belgium.

Soon, I was riding along the Scheldt River. It was peaceful. The air was cool and damp. A number of huge barges silently lumbered up the river. And I was thirsty. Really thirsty.

When the bike path split, I chose the route that pointed toward Oudenaard and went through an urban area. I hoped I’d find some bottled water. Or a fountain. Anything I could use to fill my bottle. A few minutes up the road, I rolled past a small shop that sold I’m-not-sure-what. But they had bottled water. I bought two; chugged one and filled my bottle with the other.

My thirst quenched, I pondered my next move—go onward to Oudenaard and look for the Koppenberg, Paterberg, Oude Kwaremont and/or any of the other climbs of the Ronde, or head back to the AirBnB. I was tired. I felt puny. And it was clear to me that I was in the early throws of some sort of illness. I estimated that I’d done 25 or so miles and had about the same distance to cover before I got back home. That seemed better than wandering around Flanders, basically lost, for who-knows how long.

The ride back to Aarsele was uneventful, although I got lost almost immediately. Somehow, I stumbled upon one of the roads I’d taken in the morning, which led me to several of the cobbled sections I’d ridden earlier in the day. In total, I think I rode eight sectors over 54 miles. Not too bad. It wasn’t the 70 miles/90 kilometers plus the legendary cobbled climbs I had hoped to ride. But as crappy as I was feeling, I was satisfied. I promised myself I would be back and I would ride the climbs of the Ronde, if not the entire race course.

I got back to Lion House, chugged some water, took hot bath in that awesome tub and headed out to find some food. Joke Frituur was calling my name.

I walked the 2 kilometers to Joke fantasizing about the frites and a how good a Coke was going to taste. From 100 feet away, the shop looked closed. I pulled on the front door anyway. The sign clearly stated that Tuesday was a holiday. I had missed this before. And I was pissed that the owners hadn’t somehow let me know before I wasted my time walking there. I stood in the parking lot and stared at the restaurant for a minute or two willing someone to walk into the place from the back, switch on the lights and unlock the door.

Dejected, I turned and started my walk back to town. I took a new route, hoping I might stumble upon another restaurant. I didn’t. I took a stroll around the neighborhood and checked out the local church before returning to my room. Sadly, it was going to be another meal of leftover lunch meat and cheese from breakfast. A bottle of Delirium Tremens helped me get it down.

It took me a long time to fall asleep. During the night, my dry throat turned into a full-blown sore throat paired with congestion and loads of snot. When I woke up around 7:30, I could no longer kid myself about being sick. It was either a really bad cold or the flu. I half considered cancelling my plans for the day. But, with the exception of the ride in Roubaix, this was the day I was most looking forward to. I was going to Gent to meet the man who sold me my Gios Torino. He had arranged for me to meet Julien Stevens, the man who raced the bike in 1972 and 1973. It was a highlight of the trip and I wasn’t going to miss out.

This entry was posted in Uncategorized. Bookmark the permalink.